I am not a fan of celebrities. I did have one serious celebrity crush while in middle school, and that was on David Soul, better known as “Hutch” from ABC’s original “Starsky & Hutch.”

(Fun fact: while this crush was in place, my best friend got a rabbit and named him “Starsky” so that when she put him away, she could point to his home and say, “Starsky and Hutch.” I’ve always had THE best friends.)

I’d listen to his album, “Playing to an Audience of One,” over and over again. Pretty sure my entire family knew the words to all the songs. And when David sang, “Don’t Give Up on Us, Baby,” I just knew that, despite having never met, he was singing to me.

I won’t, David…I’ll NEVER GIVE UP ON US! NEVER!

Except that, of course, I did.

And although I sort of try to keep on top of what’s going on in the world of celebrity, I do so just to keep my cultural references current. That’s not a world I want to examine under a microscope. I prefer to skim the edges, picking up bits and pieces of info as they make their way through the noise of life.

But I know that there are those in this world who follow celebrities and celebrity social media feeds with great eagerness and enthusiasm. They buy what celebrities tell them to buy; they try to dress in similar fashions; they hang on the lifestyles of the rich and famous, even if only the PERCEIVED rich and famous.  I’m not sure why they do this. I suspect there’s a part of folks that feel if they emulate what they see, then some cosmic force will bring the same celebrity their way.

Or maybe they use it as a means of escape.

Or maybe, they are just a 7th grade girl in love with a TV detective.

So when the Met Gala rolled around this year, I perused the photos from the event and thought what I always thought: Holy Smokes. The theme for 2019 was “Camp Fashion.” My hand to God, I read that and thought of sleeping bags and tents and wilderness guides in shorts and canvas hats. Would they serve granola bars and hot dogs at the After Parties?

It took me a good five minutes of looking at photos to realize it was “Camp” as defined by Susan Sontag: over-the-top, exaggerated, extreme.

And the attendees did not disappoint.

But my favorite “look” from the Met Gala was not a photo, but a video. It was taken by a friend of Katy Perry and posted to Katy’s Twitter feed.

I love it because Jennifer Lopez is wearing a Versace gown with matching headpiece, accented by a 129 carat purple sapphire and diamond necklace, a pair of vintage 1972 diamond chandelier earrings, plus bracelets and rings all from jeweler-to-the-stars, Harry Winston.

And she’s wearing it all as she exits a public bathroom stall.

Yes, as Katy is trying to become an In-n-Out Burger, J.Lo comes walking down the row of bathroom stalls, a feather wrap over her shoulder, more carats on her body than in all of Whole Foods, having just done her bathroom business.

I love this video so much I want to marry it and have its babies.

I love it because it’s real; it lifts the celebrity veil; it dismantles the illusion, because it reminds us we all pee and we all poop. Sure, some might pee and poop wearing over 100 carats of diamonds and looking like they haven’t aged in twenty years, but that toilet doesn’t know the difference. It’s all the same in there. The underwear you pull down might be a pair of $300 silk La Perla panties, or a pair from Fruit of the Loom, sold in a 5-pack at Target for $9.99 but I promise you, that toilet doesn’t know and doesn’t care.

And that’s when I realized that the toilet is the great equalizer.

Kings, Queens, Presidents, Celebrities, CEO’s of Fortune 500 Businesses, JEFF BEZOS…everyone uses the toilet. And when they do, they all do it the same way. Sure, Gwynneth Paltrow might steam her vajay-jay like an artichoke, but when she’s consumed enough kale-infused ginger tea with blueberry skin puree steeped over a fire of purifying sage built by a shaman, then that gal is going to be using the toilet just like everyone else.

This thought probably shouldn’t make me as happy as it does, but in a world of social media where very little is real and many strive for the unattainable, it just does my heart good.

So if you find yourself discouraged; if social media has left you feeling “less than,” just go into the bathroom, look at the toilet, and remember…

There is no celebrity in a toilet bowl. 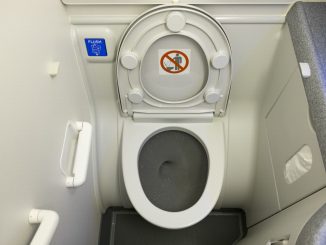 Thoughts About an Airplane Bathroom

4 Comments on A Toilet is the Great Equalizer