There are few things that stress me out more than having to use a restroom on a plane. Excuse me…the aircraft lavatory, of which there is one in the front of the cabin and one in the aft. (I made flight attendant pointy fingers after I typed that.)

I am currently on a plane flying to Kansas City. I have to pee, which is stressing me out. I am not sitting on the aisle and thus, part of the the reason for my stress…and this article.

People, the aisle seat on an aircraft is prime real estate. It is the Holy Grail of airplane seats. Its occupant is basically the Captain of the Row. Sure, it’s also the seat right under the overhead bin, making it, at times, the Concussion Seat, but really, that’s a small price to pay for the convenience of being able to pop up out of your seat at any time without bothering the rest of the people in your row. And because of this freedom, aisle sitters can eat and drink to their heart’s content. Another cup of coffee? Sure? Two more beers? Absolutely?

Now, middle seat people don’t have it easy, because hello? People on either side, but when it comes to the bathroom, they have it better than window seat people. Window seat people are screwed .They have to monitor fluid intake, lest their bladders become full.

Flight Attendant: “Would you like something to drink?”
Window Seat Person: “Umm. No. I’ll just suck an ice cube while I watch our Captain of the Row consume his three cocktails. ”

However, should the worst happen and your bladder screams out for sweet release, you have no choice.

“Excuse me,” you say to your fellow passengers. “I’m so sorry, but I have to get out to use the restroom.” And with those words, it begins.

Now one of two things will happen when a window seat person makes this announcement: either the entire row will get up, and leave their seats to let you out, or worse, the row will refuse to budge, causing you to do that one-legged hop as you work your way from the window to the aisle, grabbing on to the seat backs in front of you for stability as you extract yourself from the row. I’ve seen window seat people engage in moves that twisted their body so much it looked as though they were born without a spine. We’re talking Cirque de Soleil moves right there in the plane.

And knowing this, window people must gauge carefully the precise moment to use the restroom. Go too early, before the bladder is sufficiently filled, and you run the risk of having to go AGAIN before the flight ends. Wait too long, and you might find yourself with a “Captain has turned on the seat belt sign due to turbulence” moment.

And once out, you have the walk to the bathroom, which isn’t a lot better. You get out of your seat and head down the aisle and everyone knows why. “Oh, look-she’s going to the bathroom.”I mean, people don’t SAY that, but they think it. Everyone in the plane knows you are leaving to go “do your business.” And having arrived at the bathroom, you face the possibility that the bathroom will be occupied which will result in either having to retreat back to your seat to perform an encore Cirque act, or stand by the bathroom waiting for them to finish, which we all know is frowned upon. “No congregating by the lavatories.” They put it in the safety speech, KAREN!

If the airplane gods are smiling on you, the door will be open and you’ll be able to step inside a room smaller than a broom closet. There’s barely space to turn around. You lift the toilet lid and try to line the seat with a toilet liner, but mystery air keeps blowing the liner off the toilet. WHERE IS THIS AIR COMING FROM, you wonder? Probably from the same place that is responsible for that awful roaring noise over the sink.

And then you worry; if air is blowing out, could air also reverse and blow in, as in SUCK YOU INTO THE TOILET? I know it’s not rational. But hey, you are peeing in a tiny broom closet with air blowing up at your hoochie and the engine roaring at you from above the sink—there isn’t room in there for logic, too.

“Herb, hold my purse. I’m going to climb over you and the Captain of the Row and go to the bathroom. FYI-I’ll be gone for some time, as I’m going to stretch out this airplane bathroom experience as long as I can. God, I hope there’s extra air this time. ”

Yeah, the airplane bathroom just stresses me out. And every time I fly, I wonder if any of this is worth it. Yeah, it might take me a couple extra days to get there by car, but at least when it came time to use the bathroom, I’d be able to pull over and pee in peace, even if it’s behind a bush.

(Note: After originally posting this to Facebook, my friend, who is a flight attendant, shared with me that she always wonders about those people who take their…wait for it…LAPTOP into the airplane lavatory.
If this is YOU, you might need to re-examine some of your Life Choices.) 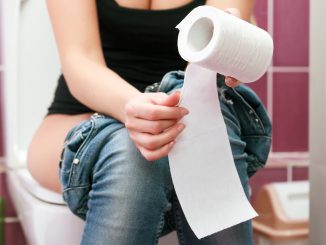 Excuse Me While I Rant

A Toilet is the Great Equalizer

2 Comments on Thoughts About an Airplane Bathroom