The United States came into existence thanks to rebels.

Funny thing is, they didn’t look like rebels. They didn’t look like misfits or the 18th century version of Indiana Jones. Some of them did, sure, but those who signed the Declaration of Independence were mostly gentlemen. The Second Continental Congress was not some ragtag team of goofballs who, suffering from boredom, decided to stick it to “the man” one stiflingly hot day in Philadelphia. The man, being King George III, of course.

No, these were men with a lot to lose. A lot. Most were successful, wealthy: 24 were in law, 11 were business owners, 9 were successful farmers. As they stood in the Assembly Room in Philadelphia’s Independence Hall, debating the future of their lives under British rule, contemplating the events that had already occurred, events that had pushed them to this time and place, one can only imagine what was going through their minds. There are many firsthand documents that tell us just what they were thinking: excitement, fear, worry, determination. Did hands tremble as each signer put quill to paper?

How could they not…they were signing their own death warrant.

If the great experiment worked–if man could truly rule himself under a democratic system of law, the sacrifice would be worth it. If not, they’d be tortured and hanged.

And yet, they put their lives on the line with a few strokes of ink because they believed in a cause far bigger than themselves, a cause that sent this fledgling country into war for 8 years, for the fighting had begun well before the Declaration of Independence had been approved.

And having won the war, General Washington was elected as the nation’s first president. He didn’t even want the job; he had just fought in a bloody war and all he wanted was to return to his beloved Mt. Vernon. But the country called and he accepted.

These men were firebrands, rebel rousers, and yet, they lived by a code of respect; a code of honor. They were flawed, imperfect men. They made mistakes. They argued. But through it all they held firm to their commitment that hard work should be rewarded and that man should govern himself:

“We hold these truths to be self-evident, that all men are created equal, that they are endowed by their Creator with certain unalienable Rights, that among these are Life, Liberty and the pursuit of Happiness.”

And here we are now, 240 years later. Would our forefathers recognize this country? Probably not. I mean, a lot has changed in 200 years. But these were men of progress and foresight who looked to the future as one of endless possibility, so I like to think they’d catch up in no time.  I suspect Ben Franklin would love the smart phone, Thomas Jefferson would be enamored with Google, and John Hancock would buy ballpoint pens by the case at Costco.

I think, too, that they would be pleased to see the country is still one of opportunity, where one’s position at birth does not determine one’s destiny. I think they would be relieved to see the Constitution, that most precious of documents, the cornerstone of our country, is still in practice, albeit trampled as of late. And they would be happy to see all of its amendments, for they intended the Constitution to be a living breathing document with no end, and those amendments grant protections. I believe they would be saddened to hear of those who disparage the Constitution, but then, I’m pretty sure Washington would point out that the right to do so was granted to them by the 1st Amendment of the very document they mock. Washington was a gentleman, but I’m pretty sure he’d be high-fiving Madison over that.

And like our forefathers, the new country they founded was not without flaws. It still isn’t. We Americans make mistakes. Some have been little; some huge. But we try to correct them; we try to make them better. Sometimes it takes time to recognize the wrong and get to a place where it IS better, and so we will argue and bicker and exercise that notorious American Spirit but the moment tragedy hits, we put it aside and lock arms in solidarity. It’s what we do.

Why am I thinking about all of this? Well, it has to do with a presidential election, an election which affects the fabric of our nation.

I don’t know who will win, but as I try to make sense of it all, I hold firm to the few things I DO know:

I know I love this country. It is a country founded on an idea: freedom and opportunity. Its stories are inspiring and heartbreaking, filled with heroes and villains and the unwavering belief that you can be whatever you want to be: “life, liberty and the pursuit of happiness.”

I know that the confidence of the American spirit is often interpreted as arrogance. And to be sure, sometimes it is, but not always.

I know that this generation doesn’t understand sacrifice in the way previous generations did. To us, sacrifice is having to wait to get the new iPhone. Or enduring a low wi-fi connection. And when you have never experienced sacrifice, you can easily become ungrateful and simmer in an attitude of entitlement.

I know that we often admire the wrong people. I’m not sure that we do it consciously; we don’t do it with evil intent. Nonetheless, we do it. We elevate the wrong people for the wrong reasons. And we need to stop that.

I know that we don’t look beyond the surface. We read an online article or hear a soundbite and consider ourselves “informed.” Which is funny, because even President Lincoln said, “You can’t believe everything you read on the Internet.”

I know that extremes are bad. Most of us live in the middle and that’s actually a pretty good place to be.

I know that many try to redefine the role of government–to grow it; to give it more power than granted it by the Constitution. And often, they succeed.

I know that many asking for your vote this November will be doing so by appealing to your fear, your anger, or your sense of entitlement–none of which should be factors in determining a president.

With all its flaws and problems, I still happen to love the United States of America. I love her regardless of who sits in the Oval Office. I believe in the principles on which she was founded and I still believe she is worth fighting for.

But then, like the spirit on which this great country was founded, I’m a rebel like that. 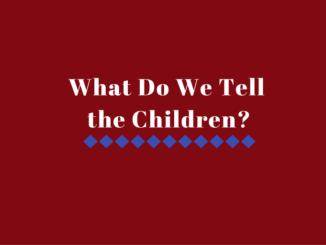 What Do We Tell the Children? 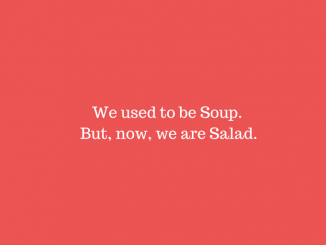 We Used To Be Soup, But Now We are Salad. 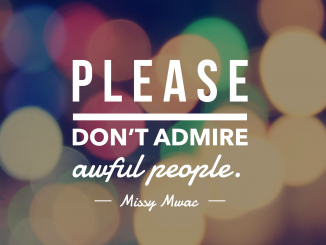