For the past two years, I have taken my friend, Scott, on a virtual trip for his birthday. Last year, we went to Paris. I spared no expense. You can read about it HERE. This year, rather than surprise him with the location, I asked Scott where he would like to go. It is his birthday, after all.
He picked the moon. THE MOON.

Upon hearing his choice, I decided two things:
1. We are NOT going to the moon
2. I’m never again asking Scott where he wants to go.

There is nothing to do on the moon. Nothing. You can survey some NASA stuff and check out a flag, look at some rocks, but other than that, it’s pretty boring. You know, ’cause it’s the moon. They don’t even have cocktails.

With the moon no longer an option, I knew I had to find a new exciting destination to celebrate Scott’s most recent trip around the sun, and after searching long and hard for ten minutes, I found it…CHINA.

Happy Birthday, Scott. Once again, you had a really really great time. xoxo 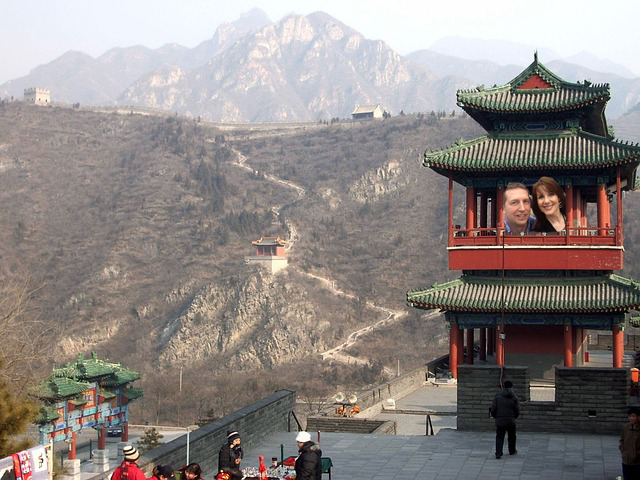 The Great Wall of China: The Great Wall is a massive feat of engineering and quite amazing to witness. But Scott and I, weary from the flight, had overdone it at lunch, and by “at lunch” I mean we mainly just sat around and drank sake. This meant we were more than a little tipsy as we toured The Wall. Needless to say, we started rapid-firing Trump/Wall jokes.

“I would vote for Donald Trump if he built a wall around Kanye West” was my favorite.

Little did we know, the guy with his back to the camera was from the Trump campaign. He was on special assignment taking “Wall Notes” and did not take kindly to our jokes. We even tried throwing some Clinton jokes in there to even it out: “How is the Democratic primary like a sailboat? They’re both RIGGED!”

Unfortunately, it wasn’t enough to sway him. We ended up hiding out in the second floor of the temple-like building to avoid his wrath. We may or may not have enjoyed another bottle of sake, which I had carried in my backpack, while we waited. 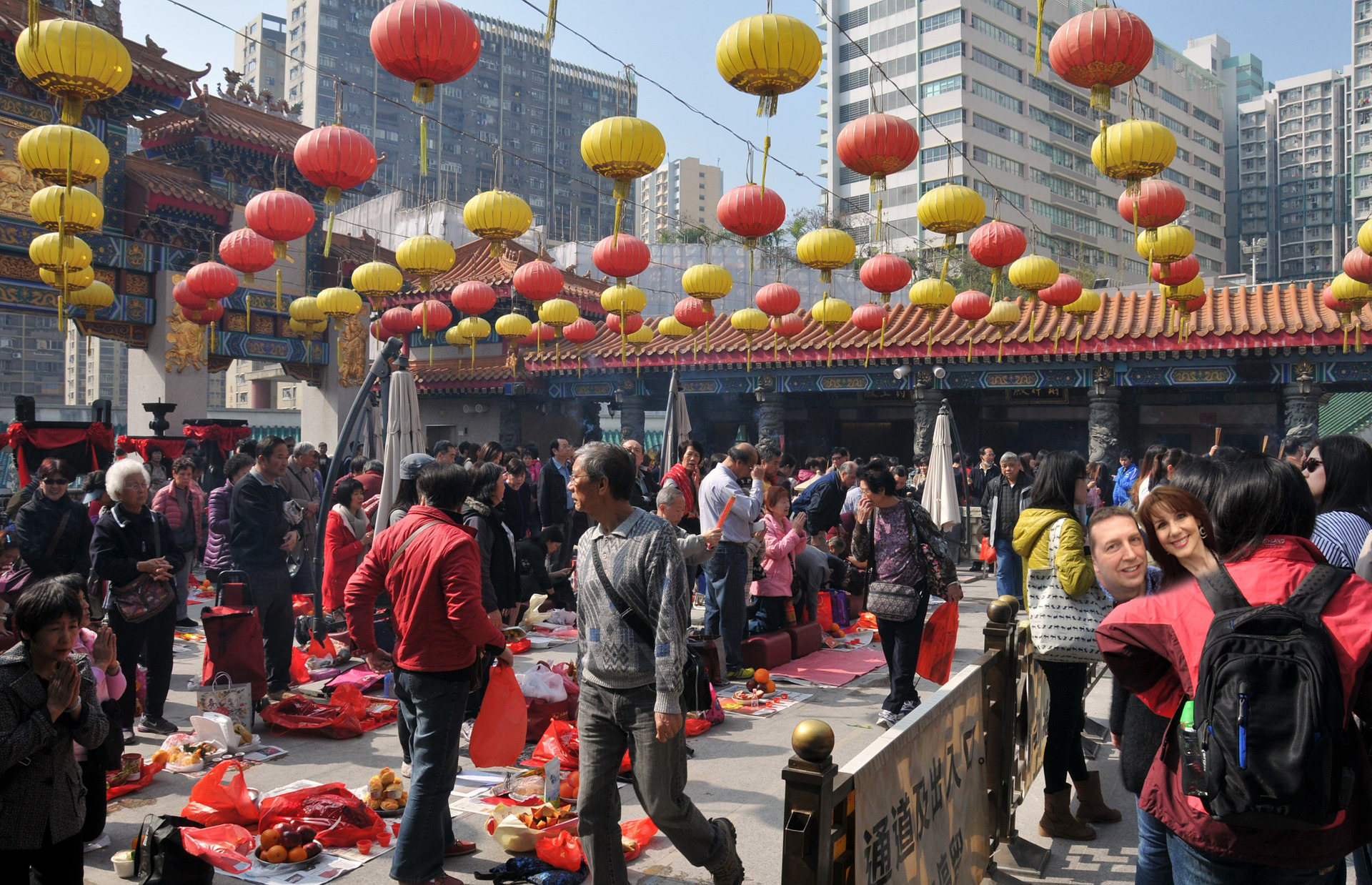 We weren’t really sure what was happening, but people were praying, so we figured it was either a religious ceremony or a rockstar photography workshop. 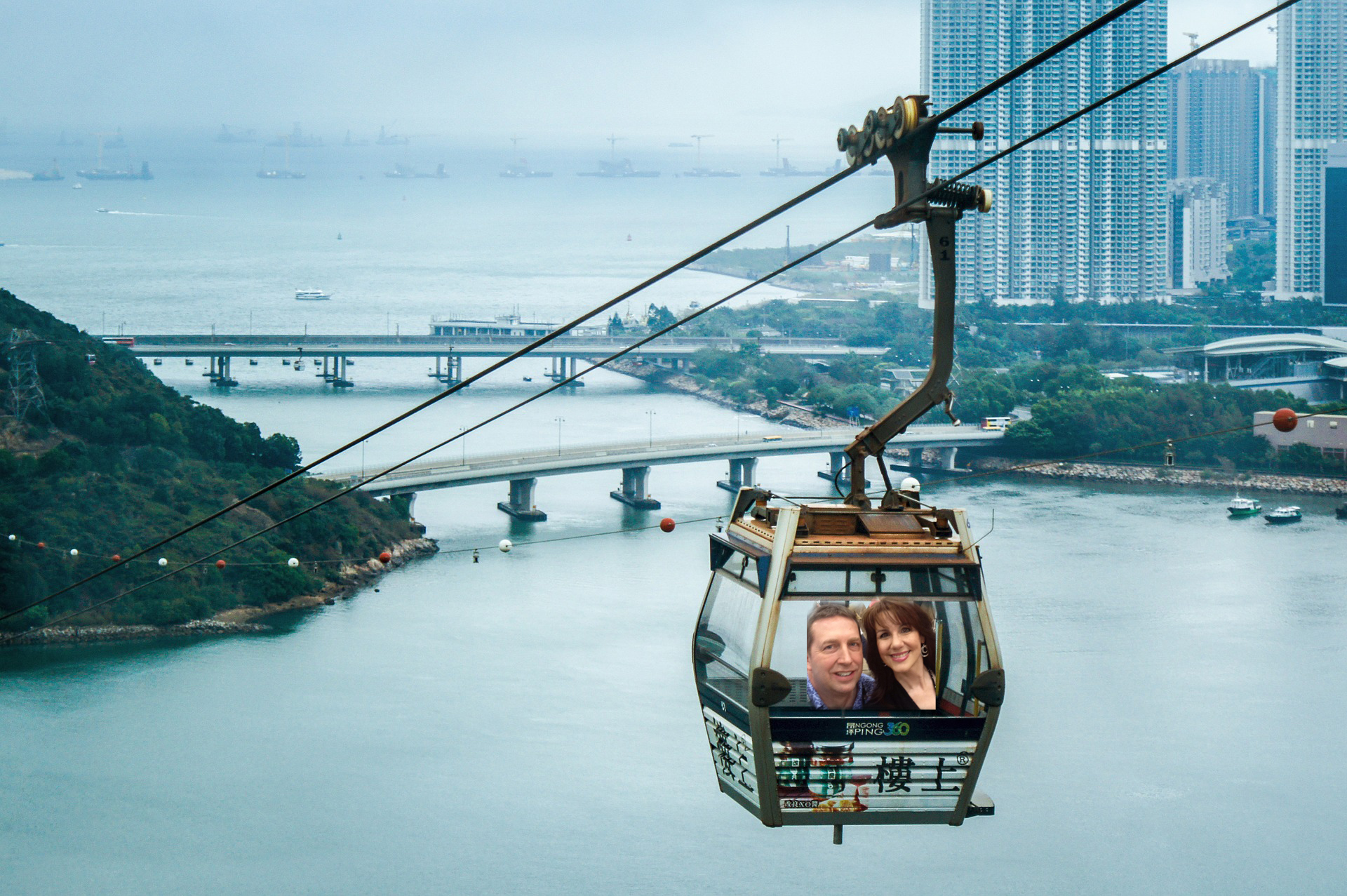 We rode this cool tram car to Lantau Island in Hong Kong. During the ride, Scott kept impersonating Ricardo Montalban, saying “Welcome to Lantau Island!”  I told Scott the only Ricardo Montalbano character worth imitating is Khan. And then we got into an argument over who was the better Captain of the Enterprise: Kirk or Picard? I realize it was Scott’s birthday, but I couldn’t let him have this one and listed the reasons why Kirk is the better of the two. I felt bad about it right away, so to make up for it, I started hopping around the tram car saying, “Da Plane! Da Plane!” This seemed to make Scott happy. (And I was glad, ’cause birthday or not, there was no way I was giving in on the Kirk thing.) 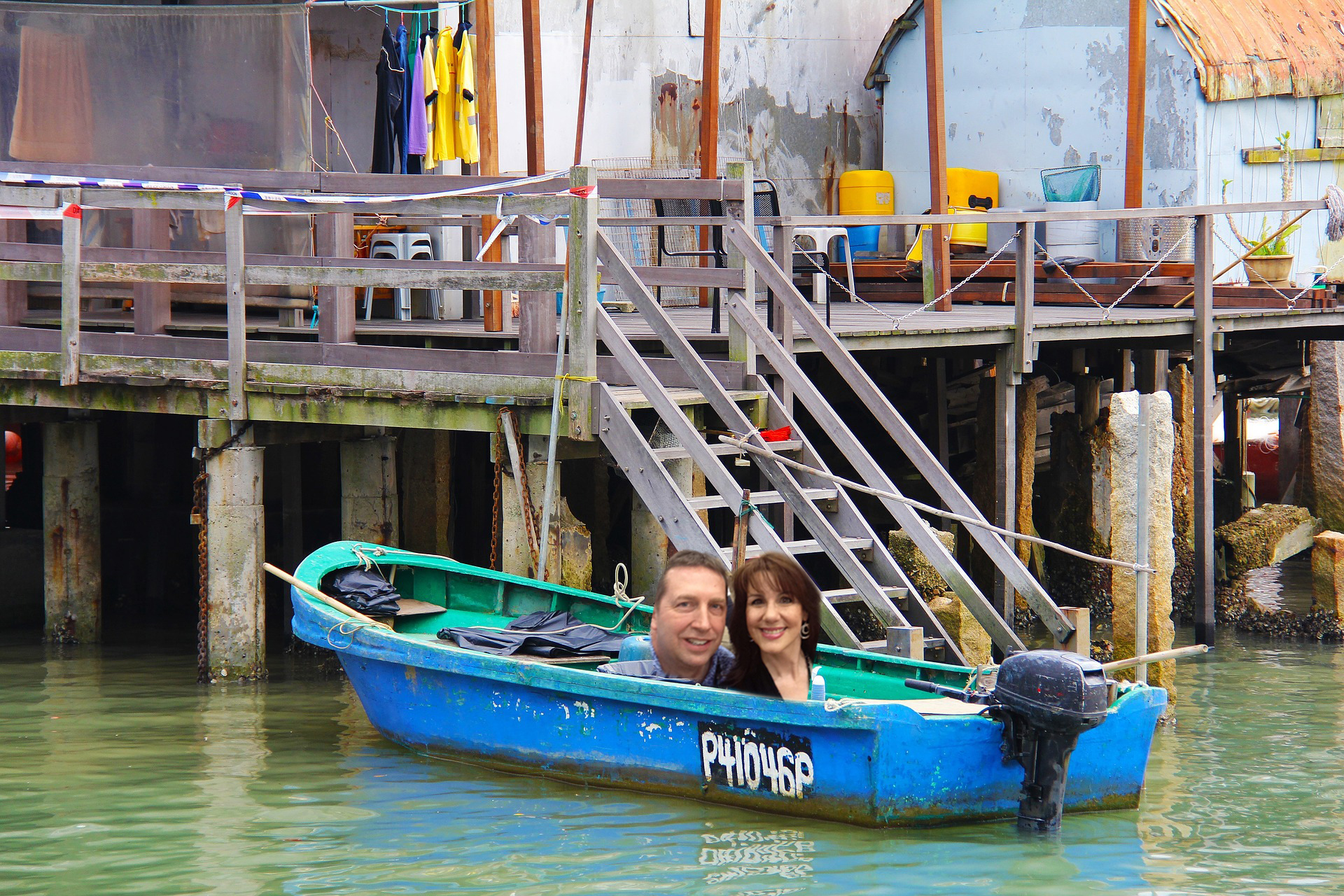 I had arranged for a sunset dinner cruise, but was a little disappointed in our vessel. 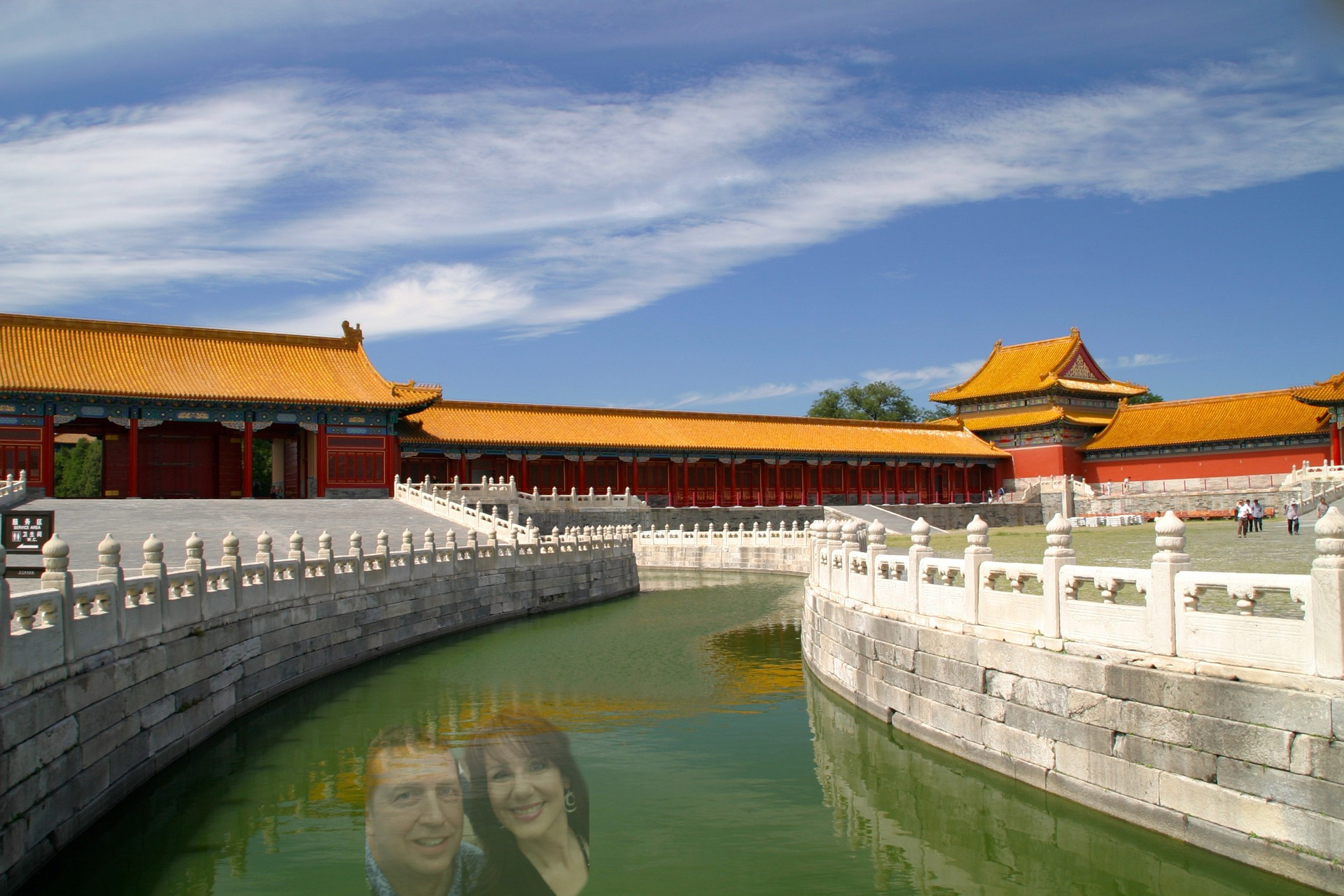 The Forbidden City. We still don’t know why it was forbidden, but they must have been pretty darn serious about it because the entire complex is surrounded by a moat. I suggested we commemorate the trip with a series of underwater portraits in the moat. Scott questioned the wisdom of doing underwater portraits without at least a couple of trained lifeguards or scuba experts on hand should something go wrong. We fell silent as we stood at the edge of the moat, staring into the still water.  But then happiness washed over us as we remembered that safety means nothing to us: WE ARE PHOTOGRAPHERS. We had a good laugh over that. 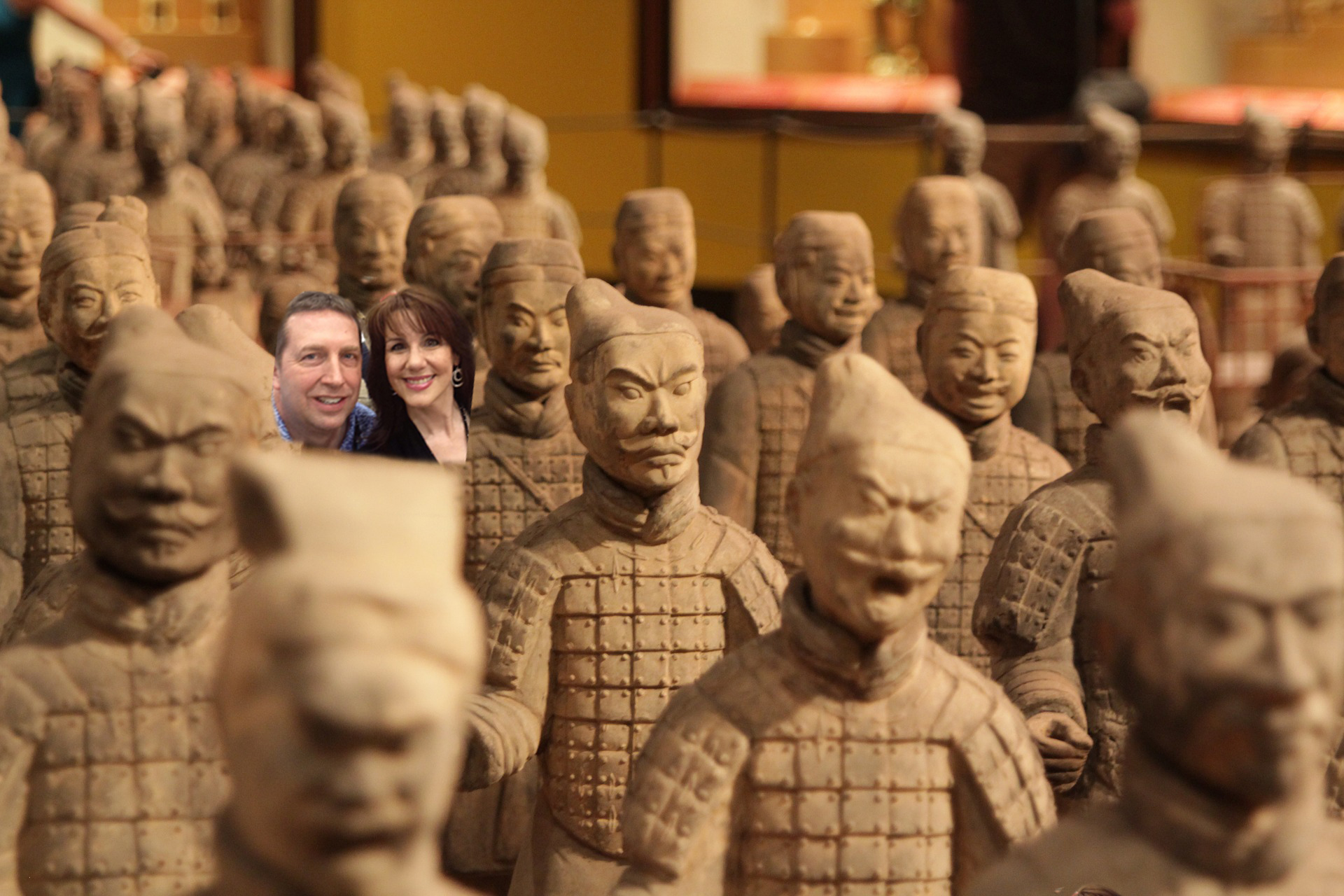 Our final stop on Scott’s Virtual Birthday Trip was to see some Terracotta Soldiers. The detail was amazing. There were a few who wore expressions of calm, but most of the soldiers looked either very angry or very happy. We felt the very happy soldiers didn’t have a clear grasp of what was happening. Or maybe they were laughing at the angry ones. And then we wondered what the angry ones were yelling, and came up with some ideas:

“I am SO angry I’m made of clay!”
“My terra-cotta penis fell off!”
“Stick a potted plant in me and I’ll cut off your head!”
“I said NO ONIONS on this burger!”

It was a wonderful trip. Until next year…

Everything is Horrible and Nothing is Good

Happy birthday to the DH. Tonight is ALL ABOUT YOU

A lovely night @leftturnabq . I had a NM Old Fashi

“Owl be seeing you in all the owl familiar place

Zozobra is a Santa Fe, NM tradition. At our house,

There is a place in Vegas way off the strip. It is

2 seconds after this photo, she jumped on my face.

Margaret Atwood, author "The Handmaid's Tale," is now in trouble for sharing an opinion piece entitled "Why can't we say "woman" anymore?"

She's trending on Twitter. The pitchforks are out.
For this.
It doesn't take much now, does it?

They say you can't do Mel Brooks' comedy in today's world.
Thank God, no one told Mel Brooks.

DH: “Hey, babe, I’m here at Target. They don’t have the “volume” shampoo you like, but they do have something that says “frizzy,” and I figured that would work. You are both “volume” and “frizz.”

That’s me. Lots of volume and frizz.
Wait.
We ARE talking about my hair, right?

“I want work requirements for everything," Senator Manchin explained, in regards to what he needs to see before approving a ginormous federal spending package filled with expensive programs.
“There's no work requirements whatsoever. There's no education

Listening to the DH use an automated system to pay a bill. He responds to "no" questions with:
"No. Thank you."
It's the "thank you" part that gets me. He's talking to a computer.
When the computers take over the world, I hope they remember he was the guy who was nice to them.