I didn’t want to be the one to say it, but after facing a discriminatory menu offering nothing but veggies, tofu and couscous, well, you are letting your non-vegan customers down. And we are disappointed. Nay, distraught. Imagine the dismay when a non-vegan sits down at a vegan restaurant, opens the menu, and finds nothing but vegan options. I shudder at the thought. I mean, what kind of world are we living in?

By failing to recognize the needs of everyone EVERYWHERE, you have purposely excluded a huge segment of the population. Just as petitions have gone out for Dairy Queen to add non-dairy items to their menu, and In-n-Out to add vegan burgers to their menu, I feel it’s only fair you take into consideration the needs of carnivores who frequent your restaurant.

Do you realize how much money you are losing by NOT adding meat to your menu? I mean, there is a HUGE segment of the population who yearns for a tasty burger and by not adding that option to your menu, you are, essentially, running your restaurant the way YOU want to instead of the way everyone else thinks it should be run.

Sure, we could just leave and go to a NON-vegan restaurant, but we’re beyond that, now. We have reached a point of entitlement and nonsense that simply will not rest until everyone’s needs are met everywhere they go by everyone.

So, in the name of community and fairness, let’s see a little bacon on that menu. Okay? Thanks. 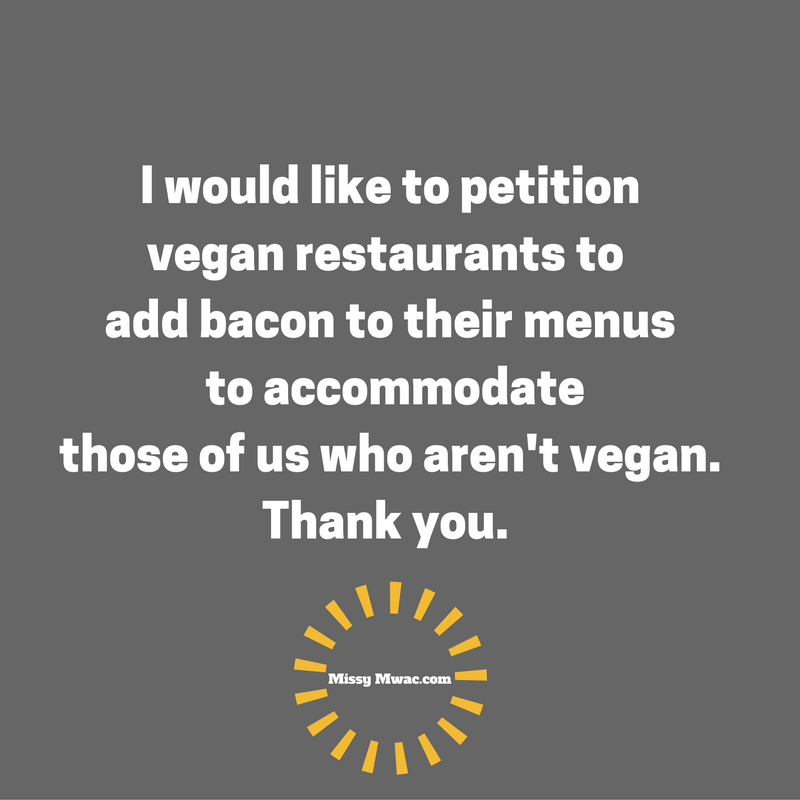