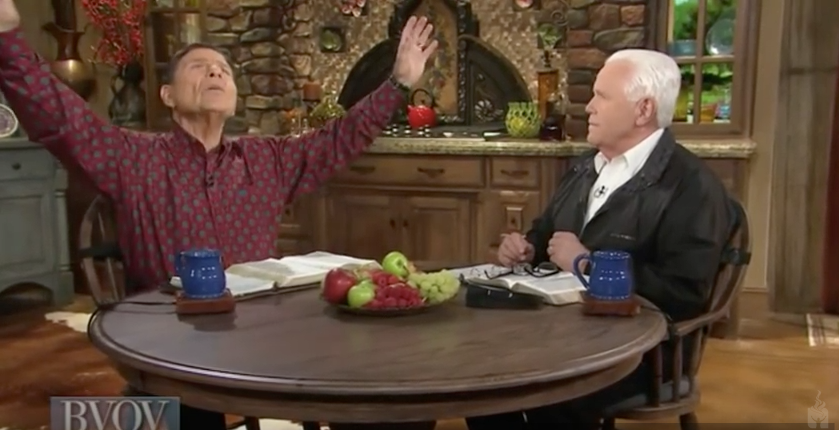 I just watched Expensive Jets for Jesus justifying why you need your expensive private jets.

I suspect you’ve been receiving some flack for this. Who woulda thunk it? I wanted to be fair to you, so I watched the whole video. It was tough. There were times I had to remind myself this was not SNL. But a little tumbler of Grey Goose and a whole lot of eye-rolling got me through.

See, Kenneth Copeland and Jessie Duplantis, I’m a woman of faith, and I don’t understand this need for posh travel, so I thought, perhaps, I was missing something. So, I listened carefully and even made notes next to some of your adamant claims of private jet entitlement:

“That’s why we are on that airplane. We can talk to God.”
Well, sure, ‘cause God doesn’t talk to those of us flying Southwest. If you have to wait in a boarding group to get on the plane and then only get peanuts as a snack, you simply can not talk to God. He’s got his ringer off. I didn’t realize that.

“When I was flying for Oral Roberts….my boss said, “Now, Kenneth, this is sanctuary. It protects the annointing on Brother Roberts. You keep your mouth shut. Don’t talk to him unless he talks. Because when he’s on a meeting he doesn’t talk to anybody but God. Now Oral used to fly airlines, but even back then it got back to the place where it agitates his spirit, people coming up to him, he had become famous and they wantin’ him to pray for them and all that. You can’t manage that today. This dope filled world. Get in a long tube with a bunch of demons.”
See, we non-televangelists are always forgetting how important you televangelists are. You can’t be bothered with people coming up to you in an airport or on a plane asking you to pray for them. WHAT A NIGHTMARE. You can’t blame us, though… we don’t have all that one on one time with God in those private jets like you do. We simply don’t know these things. We are stuck in a long tube with a bunch of peanut eating demons.

“I wanted to make that clear so that the devil can’t lie to you and say, “See that, them preachers spending all that money-those fat cats riding around….” I’m really glad this is clear. So when I think to myself, “Hey, look at those preaching the Gospel of Prosperity flying around unnecessarily in their private jets spending the money of their followers on themselves” it’s really just the devil lying to me. He probably followed me out of one of those long flying tubes.

Now, gentlemen, I watched the entire video and in spite of making notes and listening carefully, I was still scared the devil was lying to me, and I didn’t want that, so I spoke to Jesus about the issue. And boys, you’d better sit down, ‘cause He told me that he NEVER told you to fly in $65 million dollar private jets. In fact, as we get ready to celebrate, the Lord  wanted me to remind you that He rode into Jerusalem not in an expensive chariot (the New Testament version of a Gulfstream) but on a lowly, humble donkey.

In closing, the Lord also asked me to suggest that you’re substituting His Word with your very own “Gospel of Entitlement.“ From Chapter 1, verse 1: “And those leading the flock” shall use the flock as thine own personal ATM. Yea, verily.”

He also asked me to refrain from pointing out that He was the King of Kings who humbled himself to enter Jerusalem riding an ass, and you all are simply asses trying justify riding around in a Gulfstream.

(PS I’m sorry, Lord. I know you prefer I stay away from the easy jokes and that one pretty much wrote itself, but I’ve been traveling a lot.  I blame this on the demon filled flying tubes.)

If a cocktail screamed “SUMMER,” it would be a

I met the founder of Twin Falls. He was born in 18

Rum for your daiquiri and a toast to you, Papa Hem

A toast to those who make pillowy soft spudnuts.

The only thing better than the food is the chef’

I hope Thomas and Sotomayor are the new Scalia and Ginsburg.
Also, thank you to the people who disagree and remain friends.

“Justice Thomas is the one justice in the building that literally knows every employee’s name, every one of them. . . . he is a man who cares deeply about the court as an institution, about the people who work there — about people.” - Justice Sotomayor
https://twitter.com/tomselliott/status/1541760654243143680

Here's a fun fact:
I can disagree with you and still be your friend.
You and I can come from completely different worldviews and perspectives and I will still happily sit with you and have a cocktail.
Because YOU have value and your perspective and opinions are

A lot of talk about "women's rights" today from the same people who refuse to define a "woman."