We took our little dog, Scout, to Florida for a week. It was our first time flying with a pet and I was more than a little nervous, so after consulting with our amazing vet, Dr. Connley, I packed for all possible dog-on-plane scenarios, making my carry-on bag so heavy that after carrying it around for a week, I now have a hump. I used to be 5’8”; I’m now 5’3.”

But my fears were all unfounded, for Scout was a champ on the plane. We spent a wonderful week visiting with family and taking photographs. Scout saw the ocean. She chased seagulls. She toured St. Augustine. She slept in hotel beds and met her Florida cousins, Roscoe and Emily.

We thought we had the “intestinal issue” well in hand by the time we arrived at the airport for our return flight. We even stopped at a wine bar to partake of the grape. And by “we,” I mean, me.

Other than realizing we should have actually eaten food prior to boarding our first flight home, we felt we had everything under control.

We find our seats and stick the dog on the floor in front of us. We settle in for a 2hr 20 minute flight from Jacksonville to Dallas’ Love Field. I order a cocktail from the lovely flight attendant. Pretzels? Yes, please.

Drinks arrive, I pull out my laptop to work, still swimming in the blissfulness of the past week and then…

For a few brief seconds, I dare to hope it’s the baby in the row behind me or the couple in the row ahead of me. Different possibilities race through my mind. Maybe the couple had eaten a mess of Brussels sprouts for lunch and washed it down with a Kale smoothie and the baby is teething and its diaper is full and you can’t blame a baby for that and everyone needs to just be cool and it’s just an odor and it won’t last forever and LEAVE THE BABY ALONE.

But alas, after those thoughts leave my brain, the only thought that makes sense remains:

“Is that smell Scout?”

“I don’t know. I haven’t looked yet. I’m so embarrassed.”

“What are you going to do?”

“Well, you always know what to do with stuff like this.”

“Seriously? This is why the kids always came to my side of the bed during the night. Short of handing out hazmat suits to all the passengers on the plane, I don’t know what to do.”

“There’s got to be something.”

“Give me a minute to think.”

I pull the carrier out and survey the damage. Inside, two small brown sad eyes stare at me. The damage is all over the pad of her carrier. And the side. She’s a tiny dog, so you wouldn’t think an accident from her would be THAT big of a deal, but my hand to God, the US Government could have weaponized what was in that carrier. One whiff and the enemy would immediately surrender.

I open my “HunchBAG” carry-on, retrieve a package of wipes, and begin trying to clean up what I can from the interior of the carrier, sticking the soiled wipes and a pink fuzzy soiled octopus toy into a gallon-sized Ziplock bag.

I told you I was prepared. I didn’t shrink 5 inches for nothing.

Convinced I can do no more, I close the carrier. I realize we still have an hour left on the flight and she might not be done making a mess. I have never been so happy for a tiny vodka cocktail in a plastic cup in my life. I chug it down in one gulp and sit back in my chair, gripping the armrests, prepping myself for another onslaught of mess. Scout, who is clearly not feeling well, lays down in the dirty carrier, which only adds to the kaleidoscope of emotions swirling in my brain: worry topped with guilt, all covered by a thick coating of embarrassment.

The flight lands in Dallas and the DH and I formulate a game plan. I will go try to find a pet relief area to clean up everything and the DH will try to find more plastic bags for the second flight. We separate and I learn that the pet relief area is far, far away from my gate. It’s practically on the other side of the world. And our plane leaves in 30 minutes. I’m screwed. And so is anyone sitting next to me on the next flight.

And then I see it.

THE FAMILY BATHROOM. I actually think I heard angel song when I saw it.

I run over and find it vacant. Thank you, Jesus.  Now, I know the family bathroom is for people traveling with small children, but I AM a mom and I DO have children, they just aren’t small and aren’t with me, but they used to travel with me when they were small and Family Bathrooms weren’t a thing then, so I missed out on using them, so I reasoned that I’ve got a couple Family Bathroom visits owed me, dammit.

I clean Scout up the best I can on the floor. And then the carrier, removing the lining and rolling it up in those baby changing pads. And then I wipe down all the surfaces we touched with wipes and head out. I am down to one little blanket and we still had almost two hours to endure on a plane.

This leaves me with only one option.

I run inside a gift shop, head back to the toiletry section, grab a package off the wall, and plunk it down on the counter.

Two minutes later, I am crouched on the floor of the airport, putting baby diapers on my small dog while passengers walk by, giving me the side eye. I considered cutting a hole for the tail, but then, that would defeat the entire purpose of the diaper, so in the tail went. Scout wasn’t happy and I don’t blame her. Pretty sure if she could, she would have reported me to PETA.

But, it worked. Well, sort of. She was accident free on the second flight but had she not been, I feel certain those Huggies would have done the job. Of course, it didn’t smell like she was accident free because that weapon grade odor hovered over the bag like a mushroom cloud.

Huggies Diapers and additional Ziplock bags have now been added to my HunchBag. I’ll be down to 5’2″ the next time we travel.

(FOLLOW UP: What happened to the DH, you say? Was he able to find additional bags in the time we were apart? What was he doing all this time: The answer below:

After wrapping the dog in a diaper, I  hurry to the gate where I see the DH lined up to board.

I want to respond that it was because I was up to my ying yang in dog poop, but instead I ask, “Where were you?”

And with that, he proudly displays a white paper to-go bag.

Now, this gesture both warmed my heart and made me want to smack him. He remembered I was hungry when we left Jacksonville, so in an act of kindness, he got me food. But what he failed to realize is that “Scout smell” clung to my hair, my clothes and my hands, despite repeated washings. I saw it when I closed my eyes. I felt like I could taste it.

And here is the man I love more than life, handing me a box of chicken nuggets when what I really needed was a strong drink.

I tried to be appreciative but it wasn’t working. “I got you some nuggets” is one of the last things I wanted to hear after what I had just been through, however, had he said, “I got you a margarita in a to-go cup,” I probably would have had sex with him right there, in Boarding Group B. 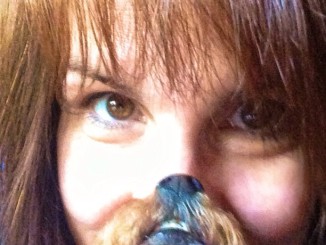 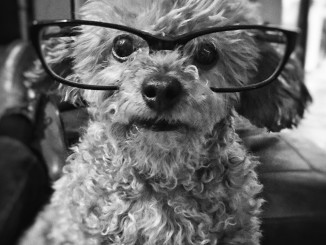 You Don’t Need a Life Coach; You Need a Dog