(It’s an awkward story about an awkward procedure. So, of course, I’m going to talk about it.)

There comes a time in everyone’s life when the need for a certain procedure occurs. It might occur due to age; it might occur in response to a problem. But either way, the moment will more than likely happen in your life when a healthcare provider looks you square in the face and says, “You need a colonoscopy.”

In my case, it was in response to a pain I’ve been having in my lower left quadrant. (That’s “doctor talk” for my left pelvic area) I’ve had the pain for awhile now. Years, actually. But as of late, it’s been bugging me more than normal. I would blame it on my left ovary if I still had my ovaries, but alas, that area is now a barren wasteland. All the reproductive organs hit the road twenty years ago, so I know it’s not that. I shared all this information with my new doctor who, after poking and prodding around said the words I did not want to hear: “Let’s schedule a colonoscopy.”

Not gonna lie; I threw myself back onto the exam table, rocked back and forth and said, “No. No. No. No. No.” My new doctor just stared at me. He’s not used to my ways. He’ll learn.

Now, a colonoscopy is a very simple procedure. The Cliff Notes version of the procedure is that you drink some stuff, go to the bathroom every 3 minutes, arrive at the hospital the next day, get knocked out, and a doctor sticks a little camera up your butt to check on the status of your colon.

If the doctor finds anything odd, they can remove and biopsy during the procedure. This way, a little problem can be removed prior to becoming a big problem. So after resigning myself to the fact that this is what has to be, I sent the DH with my prescription to the pharmacy. The prescription was for the liquid that needs to be consumed to carry out “the cleanse.”

He returns with a 4 LITER jug. Yes, that’s right: 4 liters. It was so large it had a handle built into it just so you could pick it up. The jug had a powder at the bottom and the instructions were to fill it to the top, chill, and then consume it the afternoon prior to your procedure, a day in which you may only consume clear liquids. The instructions read to drink a glass every 15 minutes until it’s gone. 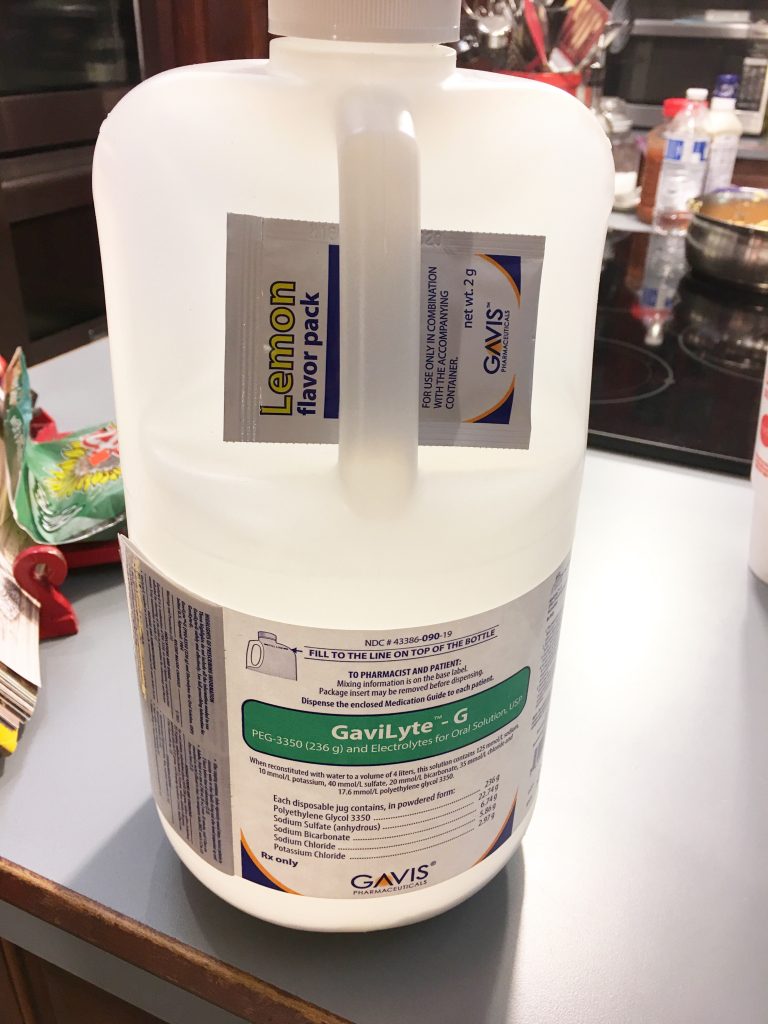 I thought what I assume most people think upon hearing the news they must consume a 4 liter jug of mystery liquid by drinking a glass every 15 minutes until it’s gone: this must be a mistake. I called the doctor’s office.

“Hi. I have a colonoscopy scheduled for tomorrow morning and I just picked up the stuff you have to drink. It’s a 4 liter jug. This thing is huge. My husband had the procedure a couple years ago and he drank a couple water bottle sized things and took some pills. Can I do that, instead?”

“No. This is the method the doctor prefers.”

And with that one statement, I know that the jug before me would have to be consumed. To ease the pain of consumption, they include a little “Lemon Flavor Packet.” I guess this is somehow meant to trick the mind into thinking it’s drinking lemonade. I immediately think of ways to make it better. Would they know if I added vodka to it? A quick Google search throws cold water on that idea. I settle on pouring it over ice and chugging it down, one pint glass at a a time.

Four glasses in, I begin to wonder if it was going to work. I mean, I have four glasses rumbling through my system and not a hint of it working. Maybe I will be the one person for whom the “cleanse” doesn’t work. Maybe I’ll drink the whole damn thing and nothing will happen.

By 10pm, it quiets down. And as I lay in bed with extra blankets, I begin to ponder if this is what GOOP’s Gwyneth Paltrow feels like. I mean, people like Gwyneth pay a lot for these cleanses. They feel healthier and lighter. They get excited about them. I didn’t feel healthier or excited. I was just hungry and cold. I would have happily taken my cleanse money and bought a pizza.

Morning arrives and I roll out of bed at the last minute. No food. No coffee. No water. It’s in the best interest of everyone in my house if I just go from the bed to the car. My head is pounding. The DH drives me to the procedure place. I sign in, get my ID bracelet, and am told to take a seat. I pick the seat right next to the bathroom, because, surprise, it’s STILL WORKING.

I’m trying to relax. I’m a little nervous, not just for the procedure but for the anesthesia. I don’t do well with anesthesia. It always makes me sick. And while they don’t knock you out with general anesthesia, sometimes that “twilight sleep” stuff is just as bad. You wake up with a headache, nausea, disorientation. Kind of like me after a very good Cocktail Club gathering.

But I can’t relax. Why? Because some genius decided that the flat screen tv in the waiting room should be tuned to CNN. And on CNN, they are reviewing Trump’s speech in Arizona from the night before. The talking heads are tearing it apart, of course. And I realized that CNN is relaxing for NO ONE. This is not the channel you want to watch to put yourself into a zen mode. If you don’t like Trump, this analysis is just going to tick you off. If you do like Trump, then listening to them tear apart the speech is going to tick you off. You are going to be ticked off either way. You are going to be hungry and cold and battling a headache and a 4 liter cleanse with a lemon-flavored packet that is STILL WORKING and ticked off. The only thing worse on that tv would have been “The View.”

I get called back by a very nice prep nurse and told to put on the gown “open to the back” and climb into bed. My snark level is running high (I was hungry, people!) and I say, “Does anyone really put these on open to the front?” She laughs and closes the curtain. The DH gives me the warning look. But even he is a little afraid of the mood I’m in, so he doesn’t push it. The DH is wise.

I climb into bed, the IV is started and then I realize I have to go to the bathroom.

In an attempt to free himself from having to go get the nurse and be THAT person, the DH says: “I don’t think you really have to go. You haven’t had anything in your system. I think it’s just nerves. Besides, you’re already hooked up to the IV.”

“People with IV’s use the bathroom, you know.”

With a resigned sigh, the DH leaves to hail the nurse who gets me wheeled into the bathroom, where, yes, I did have to make pee pee. Huzzah!

I no sooner get back into bed when the anesthesiologist returns to go over things. I share with her that I don’t do well with anesthesia, so that’s the one part of the procedure I’m worried about.

“No worries, hon,” she says, “We don’t give you the twilight sleep stuff. We give you Propofal. You fall asleep in seconds and awake without nausea or grogginess. You are clear-headed and refreshed the minute you wake up.”

“OMG. That sounds great! Can I have some to take home?” I joke.

She gives me a look as she leaves and says, “That’s exactly what Michael Jackson did.”

And then I realized what she meant.

“O…M…G…,” I say to the DH. “Did you hear that? They are giving me the Michael Jackson drug! This is freaking me out.”

“Babe, they know what they are doing. They are legitimate healthcare professionals and you are not the King of Pop.”

They wheel me into the procedure room where I am greeted by sunlight coming in a window and 80’s music playing. The 80’s music put me at ease. I thought, “These are my people.” I roll on my left side and after a few more questions are asked and answered, the anesthesia is administered via the IV.

“Okay,” the anesthesiologist says, “I’m administering it now. It will feel warm going in.” I whispered into the pillow, “That’s what she said.”

“Okay,” she continued. “Here we go. You will be asleep in 5 seconds, so pick a sweet dream.”

I focused on the faces of my children.

I remember saying, “I can taste it in the back of my mouth” and “Oh…there it is!” as my vision split in two. And then…I was in the recovery room.

And I felt freaking amazing. I mean, I felt incredible. No headache. No grogginess. I was completely refreshed and ready to murder a breakfast burrito.

I got dressed and waited for the doctor to stop by. To pass the time, I tried moonwalking, just to see if I could do it after the Propofal, but, alas, I still can’t. As I was practicing my MJ moves, the doctor came in.

Now, I come from a family with a long history of cancer. My mom, my dad, both grandfathers, numerous aunts and uncles. I braced myself for the news of what he found.

Nothing. He found nothing. Yessssss.

When I asked him about the pain I’m having, he said that over time, scar tissue can build up at the hysterectomy site and cause pain. I’m still not convinced that’s what it is, but at least I know what it isn’t.

He smiled and handed me color photos of my sparkling clean intestines taken during the procedure.
“Your colon is beautiful,” he said, ‘it looks great.”

Yeah, that’s right. I have a beautiful colon that’s lemony fresh. Just like Mr. Clean was all up in my bizness.