Breastfeeding pictures are everywhere. I mean, everywhere. Many are beautiful, showing the bond between mother and child as mother feeds child from her breast. They are tender, achingly pure images, and we see more and more of them as the movement to create Breastfeeding Awareness increases.

And what could be more natural than breastfeeding? The human female body produces milk to feed its young, as do the bodies of all female mammals. It’s the way God intended it to be.

So, I must swallow my shame as I admit…I didn’t breastfeed my children.

I didn’t do it out of convenience, because there is NOTHING more convenient than a breast already filled with warm milk.

It wasn’t out of vanity: “It’s a bottle for you, for mommy must preserve the appearance of the breasts at ALL COSTS.” Nope, not how I roll.

It wasn’t out of the desire to once again consume margaritas and caffeine. (Although, I must admit, that was a nice perk)

No, I didn’t breastfeed my children because of my nipples. Throughout pregnancy, they were on fire. ON FIRE. They were so hypersensitive that everything hurt them: my bra, a towel, the sheets, water, air…even thinking about them made them hurt. We are talking super sensitive, here.

It got to the point where I would go into the restroom at work several times a day, take out the hair dryer and blow it on my breasts through my shirt, hoping the warm air would comfort “the girls.” It helped a little, but really, there was not much that could be done, other than put up with it. I wouldn’t take an over the counter pain medication because I wanted nothing that would harm my baby. I was paranoid about it. I wouldn’t even suck on a cough drop. I drank WHOLE MILK with every meal, people, and I can’t stand milk.  I did everything to foster a healthy pregnancy, but I went through 9 months with nipples a’blazing, so when it came to make feeding choices for my child I knew there was no way on God’s green earth I was going to be able to endure an infant latching on to my nipple. (Even as I type this, 20 years later, I can still feel the pain. I might need to go turn on the hair dryer.) 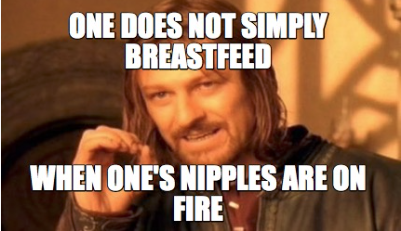 Now, I didn’t think this was an issue; I would simply bottle feed with formula. After all, I was given formula as an infant and I think I turned out okay. (There are those who would argue this point, but I assure you that a warped sense of humor has nothing to do with a lack of breast milk)

I had encountered no opposition to my baby formula ways until the birth of my daughter.  She was born with a tiny hole in her heart and as a result, she was in the NICU for several days as we waited, and prayed, that the hole would close. Thankfully, it did and after three days, she was ready to go home. Discharge from the NICU, however, required all NICU parents attend a mini-CPR class given by a NICU nurse.

And it was there, sitting at a table with other parents, each of us anxious to take our babies home, that I was Baby Formula-Shamed.

Every NICU nurse we had during our stay was nothing short of incredible, but this gal, she was something else. I don’t remember her name, I call her Nurse Ratched when I recall the memory, but I do remember exactly what she looked like. She was short and loud, with stringy hair. Judgement oozed from her pores, much like garlic, as she peered at us from behind her large round frames.

“Now, parents, we are going to go over scenarios that can occur once you take baby home, one of which is choking.”

“Now, everyone here is breastfeeding, right?”

Oh God. There it was. I looked around the table and the other mothers were nodding in agreement. Nurse Ratched was pleased, until she cast her large round frames in my direction and saw me shake my head, “no.”

And from her reaction, you would have thought I had said I was going to feed my child vodka and make her sleep with the dogs.

“WHAT? You AREN’T breastfeeding?” she asked.

“But you do know that breast milk is best, don’t you? I can’t believe you aren’t breastfeeding? WHY AREN’T YOU BREASTFEEDING?”
She was hyperventilating at this point.

Now, I could have responded with the story of my blazing nipples. I could have shared with her how many times over the past 9 months they had brought me to tears. I could have explained how I, myself, was bottle fed formula and so far, so good.

But see, I had just had a baby, which had been whisked away to NICU. I had been worried sick over this baby. I wasn’t feeling my best. My hormones made me feel as though my brain was trapped in a pinball machine. My episiotomy shouted out painfully from the confines of my underwear, “Hey, I’m still here!” every time I moved even an inch, and I still could not pee without a squirt bottle filled with warm water helping the job along.

The last thing I wanted to deal with was a nurse shaming me for using baby formula.

Her face turned kind of purple and I thought she was going to explode.

“Listen,” I said, “I love my child. I would die for my child. I will do all within my power to keep her safe. But WHY I’m not breastfeeding is, quite frankly, none of your business.”

Nurse Ratched was stunned and silent for a few seconds, as was the rest of the table, and then she gathered herself and continued the class. She has, no doubt, moved on to teach many other infant CPR classes, but I will never forget her, nor her Baby Formula Shaming.

Children are grown and healthy. They had the normal childhood illnesses, but no weird food allergies. I would always hold them close so they could hear my heart as they drank from their warm bottles. I obsessed over their well-being. They never missed a nap. They ate the best foods, got plenty of sleep, plenty of play and have grown into smart, imaginative, wonderful, compassionate human beings.

To my mind, the argument over bottle or breast is nonsense. You do what is right for YOU. If you choose to breastfeed, then embrace it and enjoy every minute. And if you choose a bottle filled with formula, rest assured your children will still grow up to be intelligent, healthy adults.

A word of warning, though: neither feeding method will produce teenagers able to keep their bedrooms clean or put the toilet paper onto the empty roll in the bathroom.